A sediment coring program was undertaken from the Danish navy vessel I/F Knud Rasmussen August 14th – 20 th 2014. The Danish Navy had generously placed the ship for the use of the ICE-ARC project team. 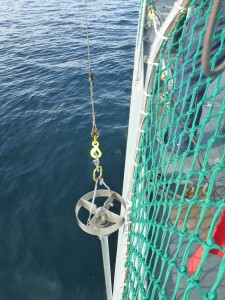 26 sediment cores were collected during the cruise and more that 150 kilometers of depth profiles recorded. Coring was undertaken during daytime and depth surveys during night.

No seismic profiles or depth records existed of the Inglefield Bredning (NW Greenland) prior to the cruise and therefore ecco sounding profiles were run to located sea bottom depressions suitable for coring. The sounding profiles will also be used to establish a coarse topographic map of the fjord  in order to outline the glaciation history of the fjord system. 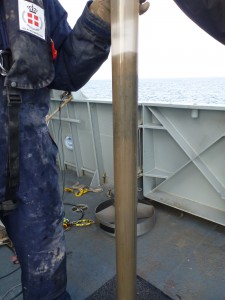 be analyzed using a suite of different methods and techniques. Based on these data a record of 4500 years of past changes including past climate changes, changes in sea ice cover and productivity will be outlined.
ICE-ARC Work Package 3 holds in addition to the objective of investigating past climate changes also an important component of present socio-economic conditions in the Qaanaaq region.

Discussions were therefore undertaken with hunters from Qaanaaq Settlement after the cruise. These discussions revealed a strong interest from the community to obtain copies of all recorded depth data as this information is important for the community to locate the best locations for winter fishing from the sea ice. 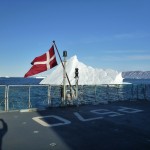 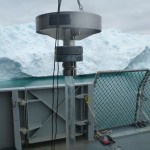 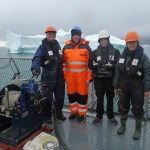 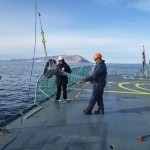 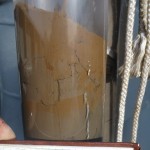