Another season of fieldwork in NW Greenland

Steffen Olsen (DMI) has just returned from another successful deployment of instruments in Qannaaq in North-West Greenland, in collaboration with local Inuit hunters Rasmus Avike and Lars Jeremiassen.

Life on the North Greenland Ice

One distinctive aspect of the research being carried out in Work Package 3 (WP3) is that we work closely with people in northern Greenland as research partners. When we began planning our work in ICE-ARC and embarked on our first fieldwork in 2014, it was essential to anchor the project in the communities that are to benefit directly from the project. 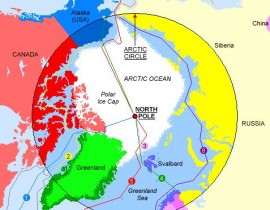 Regions of the Arctic

ICE-ARC (Ice, Climate, Economics – Arctic Research on Change) will look into the current and future changes in Arctic sea ice – both from changing atmospheric and oceanic conditions. The project will also investigate the consequences of these changes both on the economics of the area and globally, and social aspects such as on indigenous peoples.

The four year project brings together physicists, chemists, biologists, economists, and sociologists from 21 institutes from 11 countries across Europe. With a budget of €11.5M we aim to understand and quantify the multiple stresses involved in the change in the Arctic marine environment.

Particular focus is on the rapid retreat and collapse of Arctic sea-ice cover. The most spectacular retreat is occurring in summer, and the complete loss of summer sea ice may occur in a very short period of time – years to decades.

There is also a significant reduction in sea ice extent in all seasons, which, if continued, will result seasonal ice cover and a widening annual window of the ice-free season.

The outcome of the project will be a better understanding of, and ability to predict, Arctic marine change. This will provide an improvement in the scientific baseline for guiding EU and international policies on the protection of the Arctic marine environment, at a time of increased socio-economic pressure, especially in the field of resource exploitation.