One distinctive aspect of the research being carried out in Work Package 3 (WP3) is that we work closely with people in northern Greenland as research partners. When we began planning our work in ICE-ARC and embarked on our first fieldwork in 2014, it was essential to anchor the project in the communities that are to benefit directly from the project. There is considerable interest in the Qaanaaq, Upernavik and Uummannaq areas in what we will find out from our analysis of sediment cores or the thickness of the fast ice, as well as in our ethnographic work and interviews about the changes people notice in the environment around them and how they anticipate the future. We resist the idea of the Arctic as a “scientific laboratory” and seek to understand the lived actualities of northern Greenland.
Central to ICE-ARC, of course, is the study of sea ice, its changing nature, and the local and wider regional and global implications of such change. Alongside our work to track and monitor such change, however, we are concerned with understanding the importance of ice for northern communities and sustainable livelihoods. Planning for our 2015 fieldwork in winter and spring is underway and an important part of this is travelling with hunters on the sea ice as well as working in communities to map the social, cultural and economic importance of ice and living resources. As WP3 develops, its interdisciplinary nature is reinforced by its community-based participatory approach and by the contributions local knowledge can make to ICE-ARC’s broader scientific perspectives.| Mark Nuttall, WP3 Leader 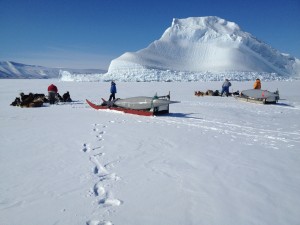