It is not common to encounter research vessels cruising through the Arctic ice pack in mid-winter. Thick and consolidated ice, polar night, and extreme weather conditions do not allow researchers to widely study the Arctic system in the winter months. This year, a great opportunity came up with R/V Lance being frozen into the Arctic ice pack north of Svalbard for a half of a year in framework of the Norwegian young sea ICE (N-ICE2015) research campaign led by the Norwegian Polar Institute (http://npolar.no/n-ice2015 and https://instagram.com/oceanseaicenpi/). In January 2015, coast guard icebreaker KV Svalbard led the way through the ice for R/V Lance up to 83 degrees N, where a drifting ice camp in the vicinity of ice-bound vessel was set up to do sea ice, oceanographic and atmospheric observations in the polar night.
On the way south to the ice edge with KV Svalbard, Gunnar Spreen and Alexey Pavlov from the Norwegian Polar Institute deployed four wave buoys on the sea ice as a part of collaboration between N-ICE2015 and ICE-ARC (Task 1.1). Wave buoys are designed to track 3D sea ice motion in response to wind waves and swell propagating underneath the ice. This information is important for understanding how wave energy dissipates interacting with sea ice floes of different sizes and thickness from ice edge towards the pack ice and investigate how passing storms affect the ice pack.
In April a number of additional wave buoys, ice mass balance and solar radiation buoys contributed by ICE-ARC will be deployed from R/V Lance at around 83N. The goal of these deployments is to examine the dynamics and thermodynamics of the thinner Arctic ice pack in spring, as well as the albedo of the sea ice. 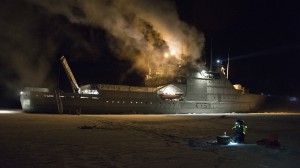