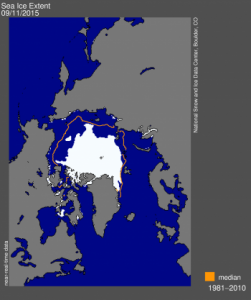 The minimum ice extent was the fourth lowest in the satellite record, and reinforces the long-term downward trend in Arctic ice extent. Sea ice extent will now begin its seasonal increase through autumn and winter.
On September 11, 2015, sea ice extent dropped to 4.41 million square kilometres (1.70 million square miles), the fourth lowest minimum in the satellite record. This appears to be the lowest extent of the year. In response to the setting sun and falling temperatures, ice extent will now climb through autumn and winter. However, a shift in wind patterns or a period of late season melt could still push the ice extent lower.

The minimum extent was reached four days earlier than the 1981 to 2010 average minimum date of September 15. The extent ranked behind 2012 (lowest), 2007 (second lowest), and 2011 (third lowest). Moreover, the nine lowest extents in the satellite era have all occurred in the last nine years.

“This extent is undoubtedly an indicator of climate change. Even though it’s the fourth lowest on record it’s an ongoing downward trend that has been monitored for many years. For sea ice to melt you need a warmer atmosphere and a warmer ocean so these changes reflect the changes in the ocean and the atmosphere.”

“The beauty of monitoring sea ice extent is that you can see it very clearly from space so you can record it very accurately. We have a very long track record.”

These are preliminary findings. Changing winds or late-season melt could still reduce the Arctic ice extent, as happened in 2005 and 2010. A full analysis of the Arctic melt season will be available in early October.