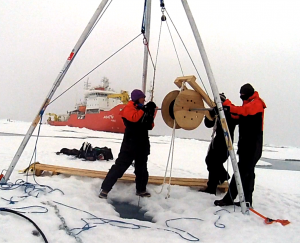 The ICE-ARC team deploying a IAOOS platform in July 2015 (Icebreaker Araon in the background).

ICE-ARC scientists participated to two summer
campaigns on board icebreakers to deploy autonomous instruments. One cruise was operated by the Korea Polar Research Institute
(KOPRI) on the Korean icebreaker Araon in July (Nome-Barrow), the second was the Transarc II cruise operated by the Alfred Wegener Institute (AWI) on board the German icebreaker Polarstern (Tromso August 15- Bremerhaven October 15).

Nicolas Villacieros (UPMC-LOCEAN) and Jean-Philippe Savy (CNRS-LEGOS) comprised the ICE-ARC team on board the nine-week long Polarstern cruise. They contributed to the hydrographic shifts of the Transarc II program and deployed four IAOOS platforms, two IMBs from BAS and one SATICE buoy from CSIC. Help from Sergey Pisarev (Shirshov Institute) is warmly acknowledged. 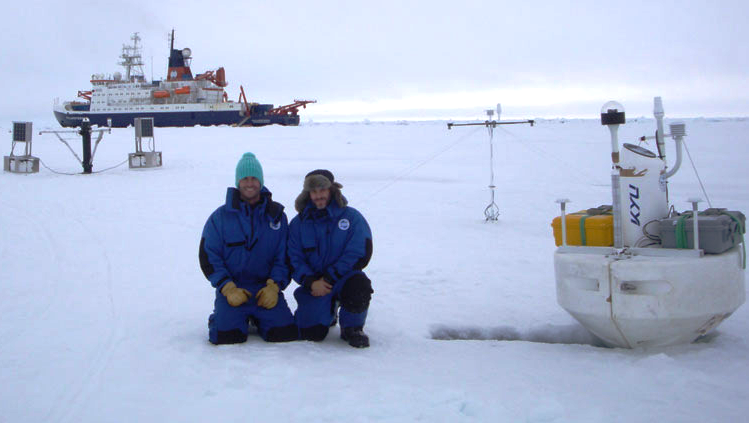 Nicolas and Jean-Philippe after having deployed a SATICE buoy (to the left) and a IAOOS platform (to the right). (Icebreaker Polarstern in the background)