Arctic Change – What this means for you

This 90-minute European Commission Briefing Session, hosted by ICE-ARC, EU-PolarNet, and the European Polar Board, focusses on the increased prominence of Arctic issues for European politics, economics and society.

The Arctic has been described as a barometer for the health of the global environment; it is a region in a state of flux. Long-term temperature records have revealed that the Arctic has warmed more than other regions. This ‘Arctic amplification’ of global warming has led to major and quantifiable changes across the region from changing atmospheric circulation patterns and the melting of glaciers and ice sheets, through to the thawing of permafrost and the changing of the physical environment in, on, and above the Arctic Ocean.

Session organiser Dr Jeremy Wilkinson from British Antarctic Survey (BAS) is an expert on sea ice and project lead for ICE-ARC – He says:

“The increased global focus on the Arctic brings significant regional opportunities and possibilities, such as new shipping routes, fisheries, and hydrocarbon extraction. But with this comes the potential for conflict and risks to human activities across the region and beyond. The ICE-ARC project, EU-PolarNet (an EU Coordinating Action) and the European Polar Board are committed to connecting science with society through dialogue and engagement with businesses and communities living on the frontline of environmental change. The aim of our session is to stimulate new thinking and raise awareness of the importance for discussion crossing the boundaries between science and society.” 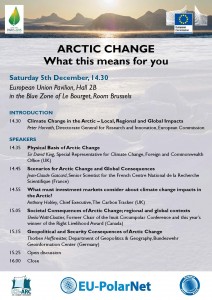