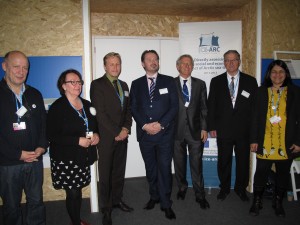 ICE-ARC was proud to take part in this year’s historic Paris Climate ChangeConference in December (COP21). Our programme co-hosted an Arctic Side Event with the EU-funded consortium programme EU-PolarNet and the European Polar Board. A small team represented by each of the hosts organised speakers for a 90-minute briefing session in the EU pavilion to provide high-level decision-makers with a holistic overview of Arctic change and its multi-sector impacts (climatic, societal, and economic).

Our Arctic Side Event attracted around 100 people and the European Commission reported that this had been the most popular event held in its pavilion that day. Tweets tagged to #ArcticCOP21 give a flavour of the event with pictures of the speakers in action and you can read more about the side event programme on our website.

Jeremy Wilkinson says: “The aim of our session was to stimulate new thinking and raise awareness of the importance for discussion crossing the boundaries between science and society. As world attention focused on the climate change talks we brought together leading scientists, economists and geopolitical commentators to highlight the increased prominence of Arctic issues for European and global society.”