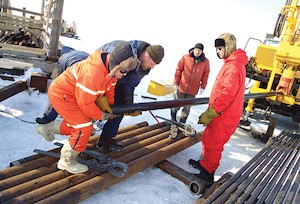 Acidification off the coast of Northern Siberia in the Arctic Ocean is caused by increased thawing permafrost and freshwater discharge. Importantly, acidity levels of the region are much higher than previously predicted, according to a new study published in journal Nature Geoscience. The study, carried out by researchers Igor Semiletov, Natalia Shakhova and colleagues, was supported by the ICE-ARC programme.

Ocean acidification, which affects marine ecosystems and carbon cycling, is considered to be a direct effect of atmospheric carbon dioxide uptake. Accumulation of atmospheric CO2 in surface waters is predicted to make the ocean twice as acidic by the end of this century. The Arctic Ocean is especially sensitive to ocean acidification because more CO2 can dissolve in cold water.

The current study shows, however, that anthropogenic CO2 uptake from the atmosphere is not the major cause of the acidification in the East Siberian Arctic Shelf.

The researchers studied the chemical and physical characteristics of ESAS waters over 13 years since 1999. Using carbon isotopic data and simulations of water sources, they found that degradation of terrestrial organic matter from thawing coastal permafrost and discharge of Arctic river water with elevated CO2 concentrations drive the persistent acidification.

“We studied the level of aragonite, a carbonate mineral that is necessary for some marine organisms to survive,” explained Igor Semiletov, lead author of the paper and a scientist with the International Arctic Research Center at the University of Alaska Fairbanks. 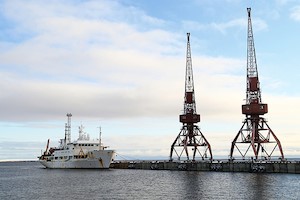 The photo shows one of the research platforms; using vessels of different sizes allows work in shelf water of different depth without disruption, making it possible to observe natural, on-going processes in the East Siberian Arctic Shelf. Photo by Igor Semiletov.

“We found extreme aragonite undersaturation in the ESAS, which means the aragonite concentration has dropped way below its threshold,” he said.

“This indicates that acidity levels of this region are much higher than those projected for 2100, which were based only on atmospheric CO2 uptake,” added Natalia Shakhova, another author of the paper and a scientist with IARC.

ESAS is particularly vulnerable, as four large Arctic rivers that accumulate their waters from extensive permafrost-underlain watersheds bring river discharge to the area.

“ESAS covers more than one-fourth of the Arctic Ocean open water. As these waters are exported to the surface of the central Arctic Ocean, the consequences of the effects on marine ecosystems in the entire Arctic Ocean would be extensive,” Semiletov said.