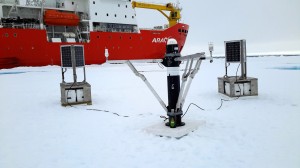 Figure: SI06 deployment site, near the conjunction of the Beaffourt gyre with the Transpolar Current, August 2015.

ICE-ARC partner CSIC are deploying a series of SATICE buoys. SATICE, is the first high-rate, high-precision positioning experiment on sea ice in the Arctic Ocean. It consists of an array of five polar GPS buoys operating simultaneously. Each buoy collects continuous GPS data while drifting on sea ice. Data from each buoy is streamed over a satellite link to a central computer on the Internet in near real time, where they are processed to estimate the time-varying buoy positions.
Within ICE-ARC CSIC are focusing on optimizing the power consumption of the SATICE systems by adding on board power monitoring hardware and by changing the core GNSS receiver to a newer and less power hungry device (0.5W less,). They have also redesigned some parts of the software to reduce the power load of non-essential payload during winter night operation. 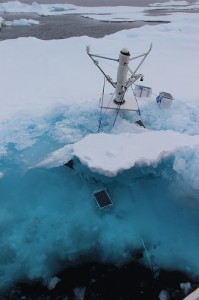